Non-current Assets, also known as long-term assets, are investments that are expected to be realized after one year. They are capitalized rather than being expensed and appear on the company’s balance sheet. Depending on their nature, they may undergo depreciation.

Fixed Assets are a type of Non-current Assets and include the properties bought for their productive aspects, such as buildings, vehicles, equipment, land, and software.

For example, let’s say we buy a car for $ 27,000. We plan to amortize it over five years, and we will sell it for $ 7,000 afterward. Using the linear, or straight-line, depreciation method, $ 4,000 are expensed each year as depreciation expenses. After five years, the Accumulated Depreciation amount reported on the balance sheet equals $ 20,000, leaving us with $ 7,000 of Not Depreciable Value, or Salvage value.

CPA Books Accounting handles depreciation by creating all depreciation entries automatically in draft mode. They are then posted periodically. 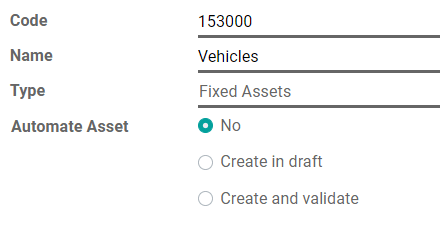 On a draft bill, select the right account for all the assets you are buying.

Start editing the product, go to the Accounting tab, select the right Expense Account, and save.

An Asset entry automatically generates all journal entries in draft mode. They are then posted one by one at the right time.

Click on select related purchases to link an existing journal item to this new entry. Some fields are then automatically filled out, and the journal item is now listed under the Related Purchase tab.

Once done, you can click on Compute Depreciation (next to the Confirm button) to generate all the values of the Depreciation Board. This board shows you all the entries that CPA Books will post to depreciate your asset, and at which date.

What does “Prorata Temporis” mean? #

The Prorata Temporis feature is useful to depreciate your assets the most accurately possible.

With this feature, the first entry on the Depreciation Board is computed based on the time left between the Prorata Date and the First Depreciation Date rather than the default amount of time between depreciations.

What are the different Depreciation Methods #

The Straight Line Depreciation Method divides the initial Depreciable Value by the number of depreciations planned. All depreciation entries have the same amount.

Assets from the Purchases Journal #

You can create an asset entry from a specific journal item in your Purchases Journal.

To do so, open your Purchases Journal by going to Accounting ‣ Accounting ‣ Purchases, and select the journal item you want to record as an asset. Make sure that it is posted in the right account (see: Change the account of a posted journal item).

Then, click on Action, select Create Asset, and fill out the form the same way you would do to create a new entry. 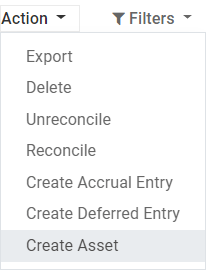 Modification of an Asset #

You can modify the values of an asset to increase or decrease its value.

A decrease in value posts a new Journal Entry for the Value Decrease and modifies all the future unposted Journal Entries listed in the Depreciation Board.

An increase in value requires you to fill out additional fields related to the account movements and creates a new Asset entry with the Value Increase. The Gross Increase Asset Entry can be accessed with a Smart Button.

To sell an asset or dispose of it implies that it must be removed from the Balance Sheet.

To do so, open the asset you want to dispose of, click on Sell or Dispose, and fill out the form.

CPA Books Accounting then generates all the journal entries necessary to dispose of the asset, including the gain or loss on sale, which is based on the difference between the asset’s book value at the time of the sale and the amount it is sold for.

You can create Assets Models to create your Asset entries faster. It is particularly useful if you recurrently buy the same kind of assets.

To create a model, go to Accounting ‣ Configuration ‣ Assets Models, click on Create, and fill out the form the same way you would do to create a new entry.

Apply an Asset Model to a new entry #

When you create a new Asset entry, fill out the Fixed Asset Account with the right asset account.

New buttons with all the models linked to that account appear at the top of the form. Clicking on a model button fills out the form according to that model.

When you create or edit an account of which the type is either Non-current Assets or Fixed Assets, you can configure it to create assets for the expenses that are credited on it automatically.

You have three choices for the Automate Assets field: